Ever since I was a child I had a love of old things. “Antiques” people would correct me. “No,” I would think. “Antiques belong in museums and serve no purpose but to remind us of the past. Old things are things you can still use.” That love of “old things” has never left me. Those wonderful objects that were made to not only serve a purpose but to do so aesthetically as possible. From old cooking utensils to hand pumps I always pause and think, can I use that? Not, how quaint. 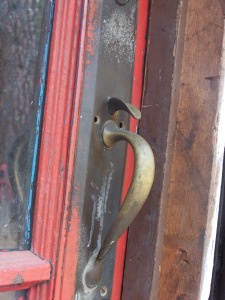 When I was young we had a neighbour named Jim. He was an old man who lived in a house build of Cottonwood logs of a girth few trees today have a chance to achieve. His house had one light bulb hanging from a cord with tinfoil to direct the light as he needed. He had a tv that he only used to watch baseball and a fridge that normally only held lunch meat and milk. Those three things was all he owned that was “new”. His house was dark and smelled of the wood stove and tobacco chew.
He would sit in his chair and tell stories about how he used to be a cook in the army and served up 300 meals a day to the boys on a cook stove like he’d never seen, it had space for 24 pots. It was an all day task back then, you split the wood between cook times and had to keep those fires just right. His own stove was just a tiny thing compared to the one he used in the Big War.
His water came from a hand pump that was attacked to a sand point pounded down into the ground water. he taught me how to hold the edges just right as the metal had worn so much they no longer fit quite right. He talked about how the leather diaphragm inside it worked to suck the water up and how to prime it. He explained that if you let the leather dry out it would crack and then… no more water. So every day, if he needed water or not he would be out there to pump up a bucket of water. No water ever tasted better to me.
(I have a picture of that old cabin and Jim in a photo album that I would love to add, but my scanner is not recognizing my computer…)

On the farm I grew up on the barn was a wonderful old thing, filled with old tools, from hand crank drills, to horse pulled plows and seeders. I loved them all.

(My mom, sister and I in front of the old barn) Sadly it burned down in the late 80’s

Perhaps this love of the old things is what led to my interest in permaculture and off grid options. For if Jim could live with but a bulb and baseball game now and then why couldn’t we all? It has also given me a fascination with old buildings. I do not think my son is quite as exceited about them as I am. 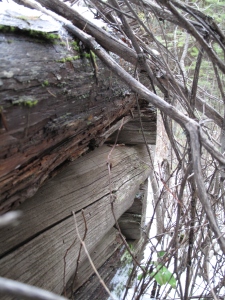 On the corner of the property there is an old cabin that is mostly been lost to the past. He and I walked out on the 30th as it was remarkably warm with the snow melting and the need for coats debatable. We climbed about the old logs and mounds of earth about it. The logs themselves held little interest to him, it was the plants that had begun to grow on them that held his focus.

I had to wonder how tall the walls had been, when it had been built and why had it been left, bot those a are questions that only the local historian could hope to answer. Luckily for me she does not live far but trying to track her down is another matter. In the mean time, I will debate digging up the floor and shifting for clues or should leaving it to melt into the forest. 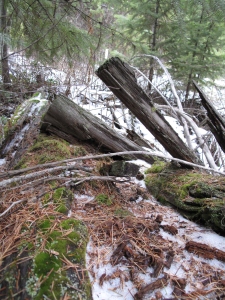